Background: The study of the factors affecting the enhancement of physical performance of individuals has been a subject of research for many years. Knee joint plays an essential role in supporting the body and transferring its weight during various activities. Therefore, it is important to fully understand knee anomalies to correct and reduce the effects of these abnormalities. The nature of football exercise can cause postural disorders in the athletes' joints, especially the knee joint. Genu varum deformity is the most common disorder among football players which can be improved by facilitating certain corrective exercises. Among these exercises, the national academy of sports medicine (NASM) method has previously shown effectiveness in correcting many deformities including genu varum.
Methodology: Out of 200 Tabriz teenage football club players, 28 individuals with genu varum deformity were purposefully selected and divided into experimental and control groups. A resistance exercise based on the national academy of sports medicine (NASM) method was performed by the experimental group players for 8 weeks with 6 sessions per week and for 60 minutes per session.
Results: The results of the present study indicated a significant difference in genu varum severity between the control and experimental groups after exercise (p =0.05) with significant improves in the experimental group (p =0.001).
Conclusion: NASM based resistance exercises were capable of improving the state of genu varum deformity in teenage football players.

Knee joint is one of the most important joints of the lower body and plays a highly important role in supporting the body and transferring its weight during various activities. However, its support and stability are mostly provided by the muscles and ligaments surrounding it, and almost no bone factor plays a role in stabilizing it. Therefore, this joint is one of the most vulnerable joints in the body. [1]

Injury in football is a well-known and unwanted phenomenon due to explosive activities and repeated running and shear motions. The nature of football exercise puts a lot of pressure force on the thighs, legs, ankles, and abdomen. Over-training and repetitive movements can cause postural disorders in the athletes’ joints, especially the knee joint [2].

With reports of 73% occurrence percentage, genu varum deformity is the most common disorder among football players [3]. [4] observed a higher genu varum occurrence among football players in comparison to those who do not practice this sport. Additionally, the results of [5] showed that teenagers in the 13-15 age group who are active in sports that includes a significant knee pressure, such as football, are more likely to have a genu varum knee. In this deformity, the knees move apart, inner ankles get closer and the legs become bowed, which induces a walk with an inward rotation in legs and a decrease in angles size [6]. Therefore, this disorder may disrupt the gravity axis of the lower limbs, damaging static and dynamic balance and affecting human ability [7][8][9]. Furthermore, the changing forces applied to the knee joint causes a displacement in the line of force toward the center of the knee joint (femoral tibia), increasing the pressure on the internal joint of the joint. As a result, the joint reaction force at the inner surface becomes 3 to 5 times that of the outer part of the compartment This increase in the internal compartment of the compartment can cause osteoarthritis of the knee (degenerative arthritis) [10]. [11] investigated the effect of genu varum knee on dynamic stability in the single-leg jump-landing task in two groups of genu varum and normal knee students. Results showed that there was no significant difference in anterior-posterior stability time between the two groups; however, the time needed for medial-lateral and resultant vector stabilization was generally greater in the genu varum group than in comparison to normal knee group, and this difference was significant. Therefore, due to its impact on the quality of life and sports injuries the importance of early detection and correction of this disorder is highly important.

In recent years, exercises known as corrective exercises have been used in the protocol of stretching exercises to extend shortened muscles and strengthening exercises to reinforce weak muscles [12]. Previously, [13] investigated the effect of corrective exercises to reduce the distance of the internal femoral condyle in 12-14 year-old girls with genu varum deformity for two months (three sessions a week) and they concluded that these exercises were effective in reducing the intercondylar gap. In another study about the effect of resistance training on static balance and pain in elderly women with osteoarthritis and knee varus, it was reported that a period of elastic band resistance exercise was not effective in correcting the aforementioned deformations; however, the training had significantly reduced the pain attributed with these deformities [14]. The study of [15] illustrated that corrective actions improved pressure distribution pattern of people with genu varum knee and improved their walking pattern

The effectiveness of the national academy of sports medicine (NASM) based method of exercise was previously studied. In a comparison between conventional and NASM corrective exercises, [16] found that NASM method was more effective in correcting genu varum deformities in football players. Furthermore, [17] reported an impressive effect after 8 weeks of NASM training on deformation recovery in football players with cases of more than 2.5 cm genu varum knees deformation. Therefore, the aim of the present study was to evaluate the correction effect of resistance NASM based exercises on teenage football players with genu varum knee deformations.

In this study, 28 teenagers out of the 200 Tabriz teenage football team members within the age group of 12 to 15 years were selected. Team members with an ankle sprain condition over the past six months; had knee surgery over the past year; or had hip surgery in the past six months were excluded from the selection procedure. Genu varum severity evaluation was carried out while the medial malleoli touching each other, by measuring the intercondylar distance using a caliper. All the 28 selected subjects were chosen for having genu varum cases of at least 2.5 cm and divided into control (n = 14) and experimental (n = 14) groups. All the participants were fully aware of the exercise nature and accepted to undergo the proposed training program.

Exercises were performed for 8 weeks, 6 sessions per week and 60 minutes per session. Subjects (experimental group) were asked to participate in a core exercise program that included four exercise stages (inhibitory, stretching, activation and post-treatment) after warm-up [18].

Containment stage: The term containment refers to a decrease in neuromyofascial tissue overactivity, which is achieved through the constant pressure of an object with a specific intensity, extent, and duration. For this purpose, the rolling foam was moved repeatedly for 30 seconds over the intended area (Table 1).

Stretching stage: This technique is used to stretch muscles and connective tissue that were mechanically shortened. The stretching time started with 10 seconds and reached 30 seconds in the last week (Table 2).

Activation stage: refers to the stimulation or retraining of inactive myofascial tissue. Since the abnormalities of the human motor system arise from both overactive and inactive muscles, a comprehensive corrective strategy should be considered to eliminate inactive muscles. These exercises were performed with 10 to 15 repetitions per set, including 1-2 seconds of extraverted contraction at the end of the range of motion and 4 seconds of extraventricular contraction (Table 3) and (Fig. 1 A-F). 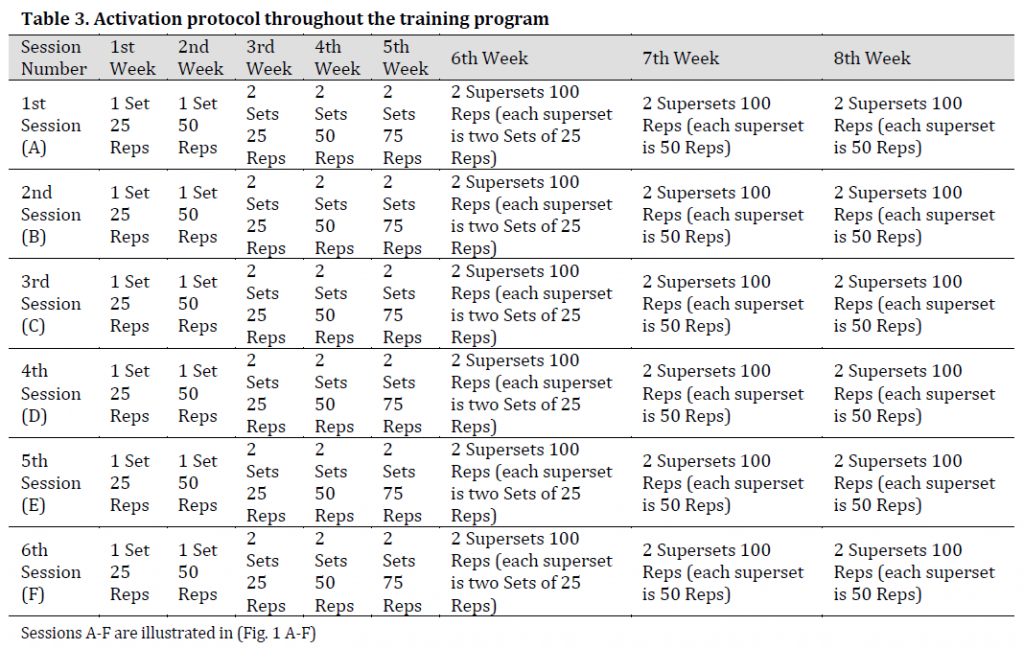 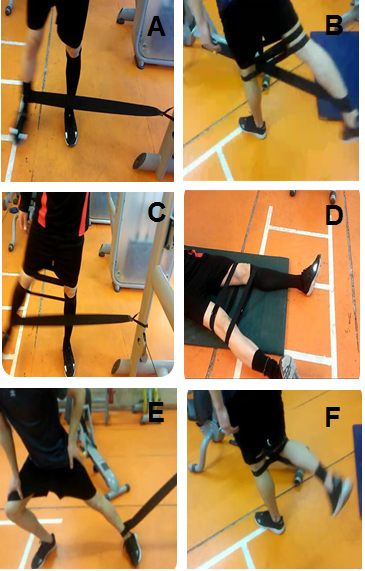 Figure 1. The exercises carried out during activation stage in training sessions. A-F exercises were carried out through sessions A-F shown in (Table 3) and repeated weekly for 8 weeks.

Coherence stage: This technique was used to train and coordinate nerve and muscle function through progressive functional movements. The coherence technique, which is the last component of the correction chain, is performed through the application of dynamic coherent movements (Table4).

The intercondylar distance for both test groups’ members was measured before and after the training period. To verify the normality of the data, Kolmogorov–Smirnov test was carried out. Dependent and independent t-tests were used to investigate the research hypotheses. IBM SPSS Statistics V21.0 software was used to perform statistical analysis.

The results of Kolmogorov–Smirnov test indicated that both the control and experimental models had a normal distribution.

The results of independent t-test showed that there was no significant difference and homogeneity between the control and experimental groups before exercise. While on the other hand, the test results between both groups after the experiment showed a significant t value of 2.11 (p=0.05) (Table 6).

Table 5. Paired-sample t-test before and after the national academy of sports medicine NASM based corrective exercises

Table 6. Independent t-test before and after the national academy of sports medicine NASM based corrective exercises

The results of the present study are in agreement with previous studies which indicated the correcting effect of NASM based training on football players [16] [17] and girls with genu varum. Furthermore, similar corrective effects were noticed on lordosis [12] and pediatric flatulence [19] by facilitating NASM exercises.

We can conclude that NASM based corrective exercises can be used as a complete genu varum corrective protocol in early stages (teenagers) especially in those of high injury risk and high genu varum occurrence rates such as football players.

The main two advantages of this method are that it requires no special equipment and can be done with little supervision, which makes it a suitable method for group correction sessions. 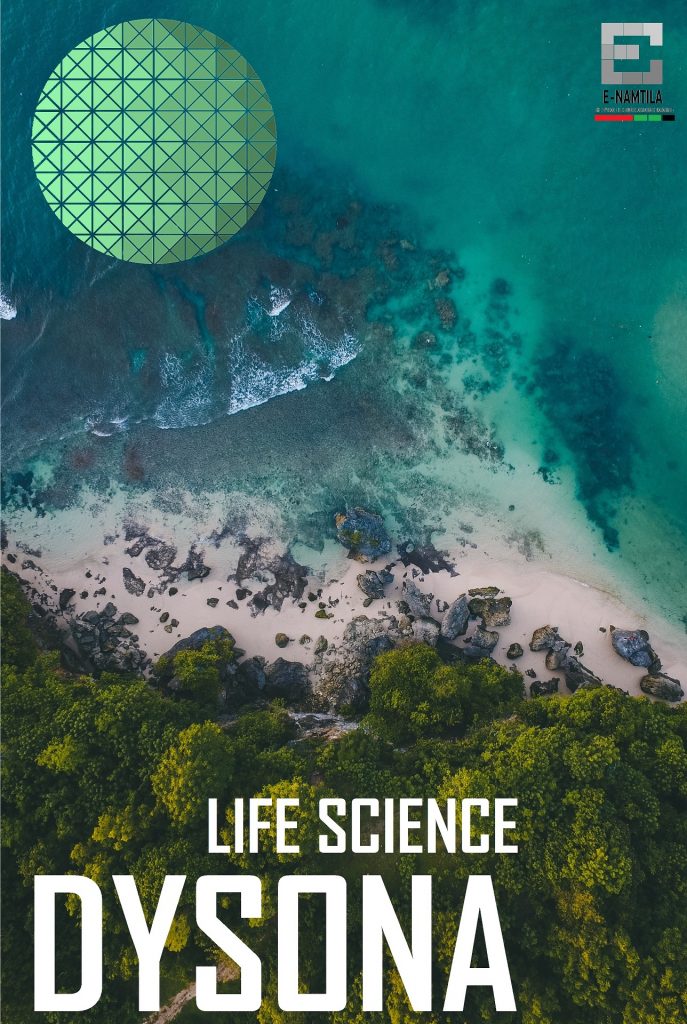