Heavy metals are among the highly dangerous pollutants although various physical and chemical remediation methods are available, phytoremediation is so far one of the easiest, safest, and cheapest methods for heavy metal remediation polluted sites. In this research, heavy metal phytoremediation potentials of the previously generated CYP4502E1 expressed in A. thaliana and S. grandiflora plants were evaluated. For this purpose, both transgenic plants were grown under greenhouse-controlled conditions. Firstly, plant phytoremediation potentials were evaluated under different irrigation inputs of Mn (75, 100, and 125 ppm); Cu (75, 100, and 125 ppm); and Pb (30, 40, and 50 ppm). Additionally, plants phytoremediation potentials of Zn (41.9 ppm) and Br (51.3 ppm) removal were evaluated overtime after 5, 10, and 15 days of growth. Results showed a significant increase in Mn, Cu, and Pb plant content in both plants with increasing contaminant inputs. Pb content in pot soil where S. grandiflora remained almost constant under the increased Pb inputs, which refers to the high potentials of this plant in remediating Pb. Contaminated soil experiment also showed a significant increase in Zn and Br content in both plants over time with a significant decrease in soil contaminants contents.

Heavy metals are considered among the most dangerous pollutants of air, water, and soil. Soil pollution with heavy metals is exceptionally problematic as it is more persistent than water or air pollution [1][2]. Moreover, the traditional physical and chemical remediation methods are extremely tedious, expensive, and might be environmentally disruptive [3]. Therefore, bioremediation methods, particularly phytoremediation, are proposed as more suitable alternatives [4].

Phytoremediation is the usage of plants and their associated microorganisms in the soil to remove pollutants or render them harmless, including organic compounds, radiological contamination, and heavy metals. This process provides an easy, cheap, and safe solution to remediate contaminated sites, and is based upon many considerations, including the pollutant toxicity and concentration effectiveness of pollutant removal or stabilization in a short period; in addition to public and environmental benefits of remediation process [5].

Many plant species have the potential to metabolize and detoxify a wide spectrum of environmental pollutants. The plant Sesbania grandiflora of the family Fabaceae has a high potential to tolerate polluted soils and has exceptionally fast growth rates as well as a high affinity for association with nitrogen-fixing bacteria [6][7]; therefore, this plant is considered an interesting choice in phytoremediation researches.

Cytochromes P450 (CYPs) are a large family of enzymes that plays an important role in stabilization and breakdown of various compounds [8][9][10], in addition to their role as initiators in the biosynthesis of plant defensive compounds and phytohormones; as it was previously reported that these enzymes activate plant’s defense and tolerance mechanisms toward herbicides [11]. Furthermore, it was reported that introducing the mammalian P450 2E1 gene instead of the P450 Genes originally found in plants have enhanced plants’ phytoremediation properties [4]. Results showed that P450 2E1 transgenic poplar exhibited an efficient trichloroethylene (TCE) and dichlorodiphenyltrichloroethane (DDT) metabolism. Additionally, our previous results illustrated that P450 2E1 transgenic Sesbania grandiflora and Arabidopsis thaliana had the same increased phytoremediation characteristics toward TCE and DDT [12] in addition to a remarkable heavy metal uptake [5][13]. Thus, the current study aims to investigate the phytoremediation potentials of P450 2E1 transgenic Sesbania grandiflora and Arabidopsis thaliana under different levels of heavy metal concentrations.

The T3 generation transgenic lines of S. grandiflora and A. thaliana plants expressing the rabbit

cytochrome gene P450 2E1 within the plasmid pSLD50-6 (Fig. 1) which were previously produced by [12] in the Atomic Energy Commission of Syria back in the year 2009. were used in this experiment.

Figure 1. The vector pSLD50-6 harboring the expressing gene P450 2E1 which was used to produce the transgenic S. grandiflora and A. thaliana plants used in the current study [12]

The transgenic S. grandiflora and A. thaliana plants were cultivated in pots each containing 100 g of soil: peat moss (1:1 v:v). Solutions of various contaminants and in different concentrations were prepared including Manganese MnSO4.5H2O (75, 100, and 125 ppm); Copper CuSO4.5H2O (75, 100, and 125 ppm); and Lead PbCl2 (30, 40, and 50 ppm). These solutions were used as irrigation solutions for cultivated plants. Additionally, genetically modified plants were grown in pots containing 100 g of soil which contaminated with zinc (42.9 ppm) and bromine (51.3 ppm). The pots of both experiments were maintained under greenhouse conditions at 25 ○C with 16/8 h light/dark cycles with a light intensity of 3000 lux provided by fluorescent lights of variable spectra. Plant and soil samples of the first experiment (Mn, Cu, and Pb contaminants) were prepared and analyzed after 12 days, while the samples of the second experiment (Zn and Br contaminants) were analyzed after 5, 10, and 15 days using X-ray fluorescence spectrometer (XRF) following the method of [13].

Experiments were carried out in a completely randomized design. Each treatment contained four replications. The results were analyzed with Minitab 19. The analysis of variance was carried out using Tukey's test at 95% confidence interval (p≤0.05).

Results showed that increasing Mn dosage in irrigation water from 75 ppm to 150 ppm was accompanied with a significant increase in this mineral level content in both transgenic A. thaliana and S. grandiflora plants; however, Mn translocation displayed no significant increase between 75-100 ppm and 100-125 dosages in both plants (Fig 2 A and B). These high levels of tolerance toward Mn accumulation might be the result of a transformation process of Mn into a nontoxic form within plant tissue [14][15]. Interestingly, soil accumulated the lowest Mn at 100 ppm dosage in both plants. Furthermore, A. thaliana translocated Mn more effectively when compared to S. grandiflora.

For Cu translocation, it was almost unnoticeable in both transgenic plants at 75 ppm dosage; however, Cu content increased in both plants by increasing the used dosage exhibiting significantly higher levels in S. grandiflora plants after the three dosages when compared to those of transgenic A. thalianaplants (Fig. 2C and D). These results refer to the great Cu phytoremediation potential of the studied plants especially S. grandiflora [13]. Additionally, soil accumulated Cu levels significantly lower in S. grandiflora plants when compared to those of A. thalianaplants at 100 ppm and 125 ppm dosages. The increase in copper accumulation in transgenic plants may be due to the increased bioactivity in the presence of cytochrome P450 2E1 such as oxidation and reduction in addition to an increase in chelation and detoxification in xylem tissues, and this was in accordance with [16] results.

Similarly, Pb recorded low levels in both transgenic plants at low concentrations of Pb (30 ppm); however, a significant increase in Pb content was recorded in both plants after treatment with 40 and 50 ppm but it was significantly higher in S. grandiflora plants compared to Pb levels in A. thaliana plants (Fig. 2 E and F). These results corresponded with previous reports which illustrated that p450 2E1 expressed in S. grandiflora is more efficient in removing Pb when compared to transgenic Arabidopsis [13]. Furthermore, soil Pb content in pots planted with A. thaliana plants significantly increased by increasing Pb input while Pb content in S. grandiflora soil remained almost constant. High Pb concentrations were obtained in both studied transgenic plants which surpassed in the case of S. grandiflora at 50 ppm of Pb treatment compared with the previously reported levels even in plants known for their high Pb accumulating potentials such as Brassica campestris, Brassica carinata, Brassica juncea, and Brassica nigra [17][18]. 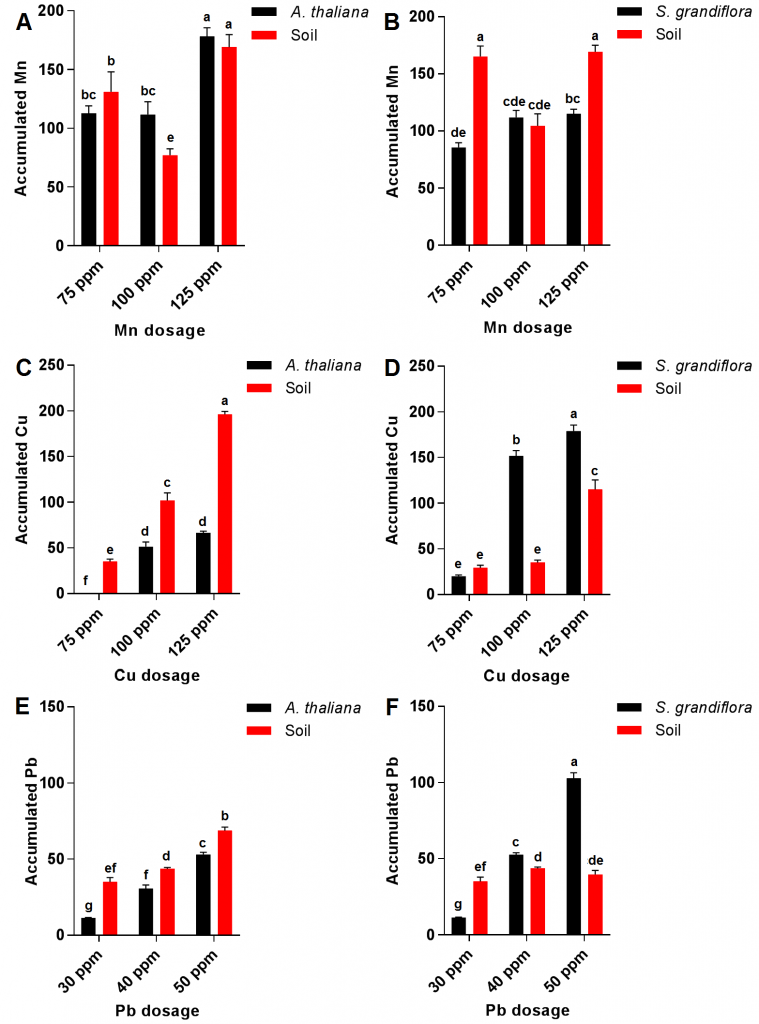 Figure 2. Accumulated Mn (A and B); Cu (C and D); and Pb (E and F) in CYP4502E1 expressing A. thaliana and S. grandiflora plants and in the soil where they were grown under different heavy metal inputs

The current results also showed no significant increase in A. thaliana Zn content during the growth period from 5-15 days; in contrast with S. grandiflora plants which showed a significant increase in Zn content during the last five days of the experiment (10-15 days period) but not during the first five days (5-10 days period) as shown in (Fig. 3 A and B). Soil Zn contaminations were almost similar in both plants when compared after similar durations. Interestingly, although the final accumulated Zn in S. grandiflora plants after 15 days was significantly higher than that of A. thaliana, there was no significant difference in soil contaminants level between A. thaliana and S. grandiflora. The increase in zinc accumulation during the experiment might be due to the increased activity of transporter proteins such as HMA4 which was previously reported in A. thaliana [19][20]. Analysis of Br resulted in contradictory results compared with those of Zn since the final Br content was significantly higher in Arabidopsis when compared to S. grandiflora; however, there were no significant differences between both plants in terms of residual Br in the soil (Fig 3 C and D). 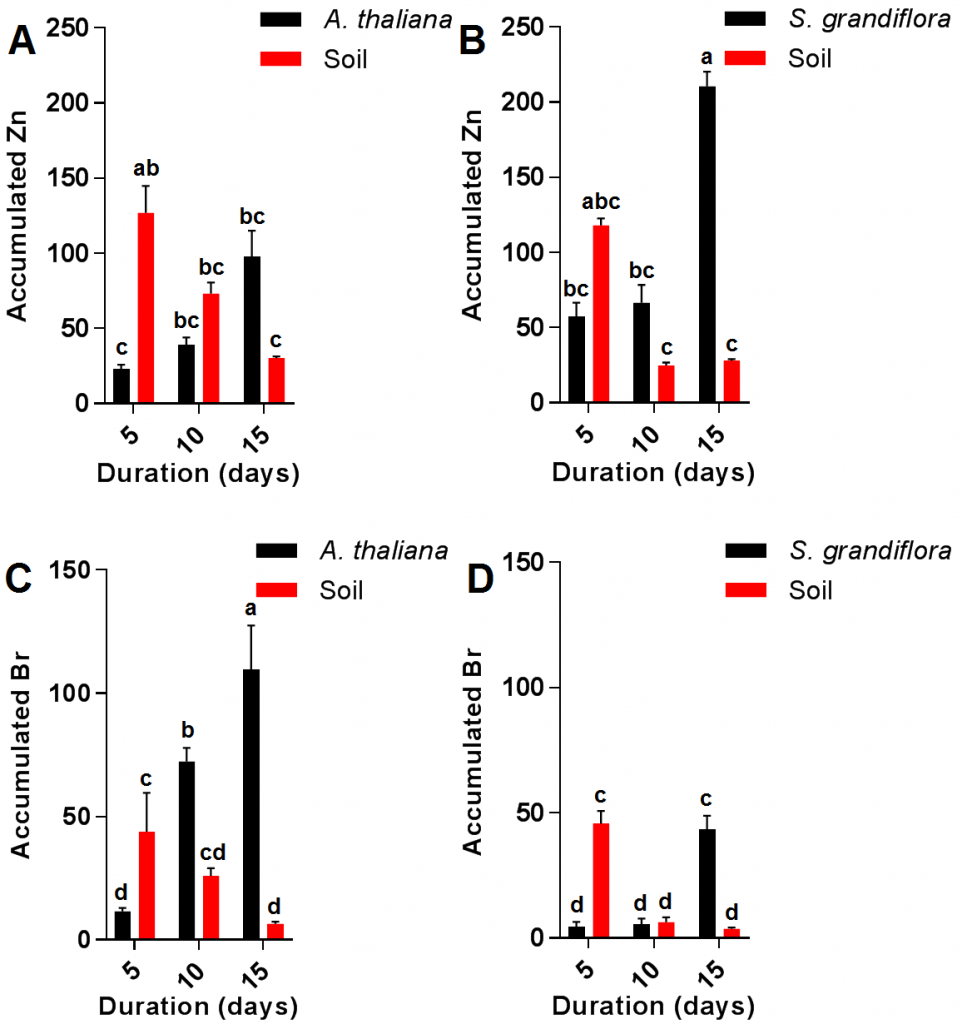 In soils that artificially contaminated with some heavy metals, a significant increase in Mn, Cu, and Pb content was reported in experimental plants. Transgenic S. grandiflora exhibited higher efficiency in removing Pb when compared to transgenic Arabidopsis since Pb content in the soil where S. grandiflora was grown remained almost constant under the increased Pb inputs, which refers to the high potentials of this plant in Pb phytoremediation. Contaminated soil experiment showed a significant increase in Zn and Br content in both plants over time with a significant decrease in soil contaminants content. Thus, it is recommended to utilize these findings in phytoremediation of the lands that are exposed to heavy metals pollution.