Bioactivity of some regular and Nano encapsulated essential oils against C. maculatus and C. chinensis

Callosobruchus maculatus (Cowpea weevil) and Callosobruchus chinensis (Bean weevil) are among the important pests of stored seeds. These insects are usually controlled by harmful insecticides. Essential oils are considered a safe substitute in controlling stored products pests. In this work, the Nano-encapsulation technique was used to enhance the effectiveness of three types of essential oils (Mentha piperita “Peppermint”, Coriandrum sativum “coriander”, and Laurus nobilis “sweet bay”). The effectiveness of both regular and Nano oils was evaluated for their insecticidal activities against the third-instar larvae of C. maculatus and C. chinensis at a concentration of 0.5%. Additionally, the ovipositional activity inhibitory effects of Nano granules were evaluated using by mixing Nano granules with cowpea at a rate of 0.5%. Furthermore, the persistent effect of Nano encapsulated oils was evaluated after 90 days in storage. The repellent effect of Nano granules was also evaluated using the arena choice test method. The highest mortality rates of both C. maculatus and C. chinensis after 7 days of 0.5% treatment were observed in M. piperita, followed by C. sativum and Laurus nobilis in both regular and Nano oils. A significant increase in the larvicidal effect in C. sativum Nano granules in comparison to its regular oil was noticed. The results indicated that both C. maculatus and C. chinensis life cycles were heavily affected by Nano granules treatments of the three tested Nano granules with M. piperita Nano granules having the highest impact. The lowest weight loss in stored cowpea was observed under M. piperita Nano granules treatment especially against C. maculatus (3%) compared to control treatment (50%). The highest repellent effect was observed under C. sativum treatment against C. chinensis (88%). These results are highly promising and show the potentials of these oils and their Nano derivatives in stored products integrated pest management.

Cowpea weevil(Callosobruchus maculatus)and bean weevil (Callosobruchus chinensis)are widely known stored seed pests. Although these species pose no direct health danger to humans, they are responsible for serious damages to stores seeds worldwide [1][2]. These pests are usually controlled using relatively low toxic pyrethroids such as deltamethrin and cypermethrin. However, there is a continuously growing trend in using nontoxic natural substances in controlling these economically important pests.

The potential biological effect of plants extracts and their essential oils in the control of different insects was the subject of various scientific works; since these extracts and oils are characterized by their biodegradable and nontoxic nature, and therefore, have few to no negative effects on the non-targeted organisms and the surrounding environment [3][4][5].

Although essential oils are considered promising organic substitutes to the traditional synthetic control method, there are various problems still related to their use such as the poor water solubility, volatility, and oxidation potential [6]. Encapsulated formulations are usually suggested to address those issues [7][8]. Urea-formaldehyde has been used since the end of the 20th century to control nitrogen release from its source fertilizer as urea-formaldehyde decomposition is controlled by the microbial activity in the soils [9]. Therefore, the aim of the current study was to investigate the effectiveness of poly urea-formaldehyde (PUF) Nano-encapsulation technique in enhancing Mentha piperita “Peppermint”, Coriandrum sativum “coriander”, and Laurus nobilis “sweet bay” essential oils bioactivity againstC. maculatusandC. chinensis.

In this experiment, third-instar larvae of C. maculatus and C. chinensis were used. The larvae were kept under laboratory conditions on a semi-artificial diet consisted of finely crushed cowpea seeds with adherent endosperm, 20% glycine, and 5% yeast powder. The experiment was carried out at 26±2°C and 70–80% relative humidity, with 16/8 hours light/dark cycles.

Essential oil extraction and the Nano-encapsulation process were carried out according to the method described in [10]. In brief, dried M. piperita leaves, C. sativum seeds, and L. nobilis leaves were obtained and the essential oils were extracted using steam distillation methods according to [11]. The nano-encapsulation process was performed using polymerization method. The Nano-capsules were composed of the essential oils as a core substance and urea with formaldehyde as casing materials. Tween 80 (Merck, Germany) was used as an emulsifier with sulfuric acid solution (10 % w/w) to control the pH of emulsion. The obtained Nano-capsules suspension was cooled down to room temperature, then, the suspension was rinsed with deionized water, filtered, and freeze-dried using an LIO-5P CINQUEPASCAL freeze dryer (Milan, Italy). Both regular essential oils and Nano granules were used in the later steps.

The larvicidal potentials of oils were evaluated. For this purpose, 0.5% concentration was used against the third-instar larvae of C. maculatus or C. chinensis. To reach the wanted concentration, 0.5g of each essential oil or its Nano granules were mixed with 100g of cowpea in each glass jar (250 cm3) [5] and ten third-instar larvae of either C. maculatus or C. chinensis were introduced to each jar. In total there were 16 treatments [(3 plant types) x (2 oil treatment method regular and Nano granules) x (2 weevil species) + (2 controls untreated) + (2 emulsifier control)] with four replications (glass jars) in each treatment. The jars were then covered with muslin for appropriate aeration and kept for seven days at a temperature of 27±2oC and 65±5% relative humidity. During the seven days of exposure (days 0, 2, 4, and 7), mortality rates were evaluated in the treated and untreated jars. The mortality rate in each jar was evaluated based on the number of dead larvae/10 (initial larvae number in each jar).

In this experiment, the same previously mentioned rates of all essential oils Nano granules were mixed with cowpea (0.5g/100g cowpea). Essential oil inhibitory effect on the ovipositional activity was evaluated by placing two pairs of mixed-sex of either C. maculatus or C. chinensis adults (2-3 days old) in each glass jars (250 cm3) covered with muslin. The weevils were left to lay eggs and the numbers of eggs per female in each jar were recorded. Additionally, the eggs were monitored after hatching and the percentage of fully emerged F1 adults in addition to malformations among emerged larvae were evaluated. In total there were 8 treatments [(3 Nano granule types) x (2 weevil species) + (2 emulsifier control)] with four replications (glass jars) in each treatment. Environmental conditions were the same as the larvicidal experiment.

The persistence effect of Nano granules during storage

In this experiment, the persistence effect of essential oils Nano granules against C. maculatus and C. chinensis infestation was evaluated after 90 days of storage. For this purpose, 100g of heat sterilized cowpea grains were stored in closed gunny sacks (10x10 cm). Nano granules were sprayed in 1 cm layers between the sacks. Then, two pairs of newly emerged C. maculatus or C. chinensis adults were placed in a jar (2L) with two gunny sacks. After 90 days, the percentage of grain weight lost was calculated using the following formula:

In total there were 8 treatments [(3 Nano granule types) x (2 weevil species) + (2 emulsifier control)] with five replications (glass jars) in each treatment [11]. Environmental conditions were the same as the larvicidal experiment.

This experiment was conducted in an arena-based choice test as described in [12]. The arena constituted of two cells (A and B) of 15X15 cm each and connected by a rubber tube to allow the free movement of the insects between the cells. Disc of Whatman No. 1 filter paper was treated with the essential oils Nano granules at 1% concentration and placed in the cell A. While in cell B, a filter paper disc submerged in distilled water and emulsifier only was placed. 20 newly emerged weevils were introduced into each arena. The number of beetles in each cell was recorded after 1, 2, 3, 4, and 5 days. The percentages of repellency values (D) were calculated using the equation:

Where T and C represent the mean number of beetles in cells A and B, respectively. Environmental conditions were the same as the larvicidal experiment.

The data were analyzed using analysis of variance (ANOVA) and mean values were compared using Tukey's HSD method at the 5% significance level [14].

The results of the larvicidal activity experiment showed that the highest mortality rates of both C. maculatus and C. chinensis after 7 days of 0.5% treatment were observed in M. piperita, followed by C. sativum and Laurus nobilis in both regular and Nano oils. Increased effectiveness levels were observed under Nano oil compared to regular oil treatments; however, this increase was only significant in C. sativum oil. The increase in C. sativum oil larvicidal effect as a result of Nano-encapsulation has closed the gap of effectiveness observed between regular M. piperita oil and C. sativum regular oil, as there was no significant difference in larvae mortality between the Nano granules of the two oils (Table 1). Interestingly, no significant differences were observed between C. maculatus and C. chinensis responses to similar treatments at similar observation times, which highlight the similarities between these two species. 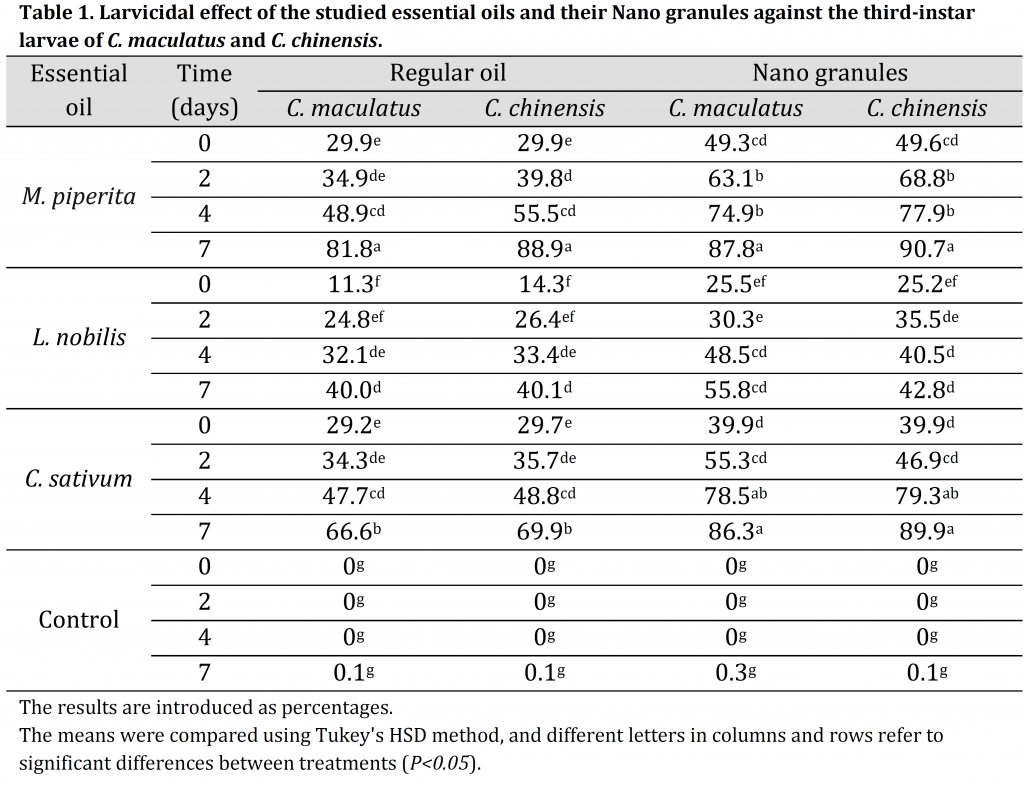 Table 1. Larvicidal effect of the studied essential oils and their Nano granules against the third-instar larvae of C. maculatus and C. chinensis.

Essential oils usually contain bioactive compounds that induce repellent, antifeedant and toxic effects in insects [4]. The insecticidal toxicity of essential oils and their derivatives has resulted in an ever-growing trend of using these substances as a substitute for synthetic toxins [15].

Similar to the results of [6] and [8], the current study showed significantly higher mortality rates using encapsulated oils in comparison to pure essential oils due to the controlled-release formulations which allow smaller quantities of the essential oil to be used more efficiently over a longer time interval [16].

Gunny sacks experiment showed that all three Nano granules treatments have significantly reduced the infestation severity of both C. maculatus and C. chinensis, and this was directly deduced due to the significant decrease in stored cowpea weight loss under those treatments (Fig. 1). The most effective treatment was M. piperita Nano granules especially against C. maculatus with an average weight loss of only 3% compared to control treatment (50%). 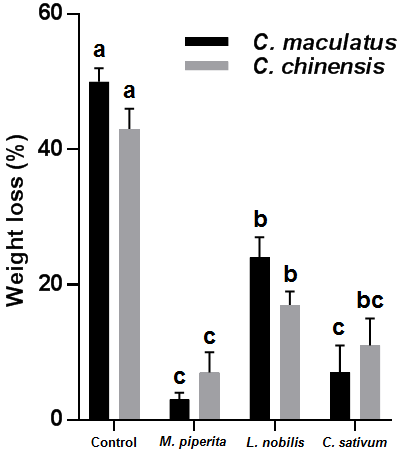 The results of repellency tests illustrated that all three Nano granules treatments have resulted in high repellency percentages that reached 88% under C. sativum treatment against C. chinensis (Fig. 2) which might refer to the potentials of this treatment in repelling insects in the early stages of infestation. 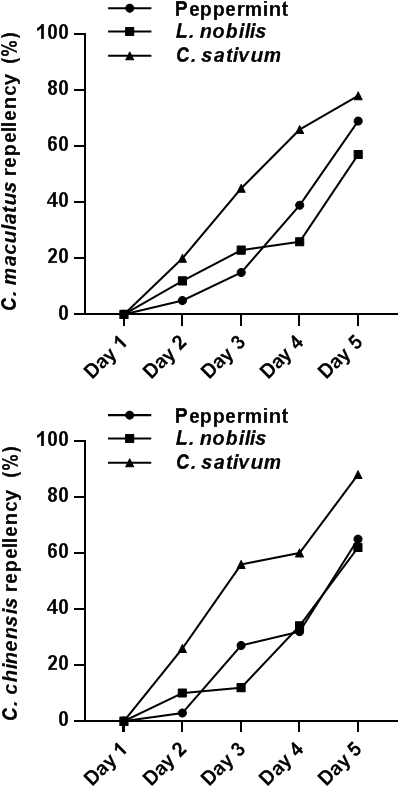 This study showed that the Nano-oils of M. piperita and C. sativum were the most effective oils against C. maculatus and C. chinensis in terms of their larvicidal, ovipositional activity inhibitory, and repelling effects.   This reflected positively on decreasing the infestation and thus decreasing weight loss in stored cowpea experimentally. These results are highly promising and show the potentials of these oils and their Nano derivatives in stored products integrated pest management. Further studies are needed to investigate the economic use of these substances in seed stores and to examine their effects against other important stored products pests.