The study was conducted to evaluate the efficiency of big-sage (Lantana camara) plant in the phytoremediation of Cd, Co, and Pb heavy metals added at 0.0, 0.2, 0.4, 0.6, and 0.8 mg L-1 concentration for each of them to in vitro culture medium. The results showed a significant increase in cadmium and cobalt levels in the vegetative parts and root of big-sage plantlets by increasing their culture medium concentrations. The plantlets supplied with 0.8 mg L-1 of Cd and Co were significantly superior compared to 0.2, 0.4, and 0.6 mg L-1 Cd and Co in terms of Cd and Co accumulation, which reached 0.192 and 0.318 mg kg-1 Cd and 0.326 and 0.312 mg kg-1 Co in vegetative and root parts, respectively. On the other hand, it was noticed that Pb did not accumulate in the vegetative parts when added to the culture medium. Furthermore, results showed that adding 0.8 mg L-1 Cd and Co resulted in higher bioconcentration of heavy metals with values 0.32 and 0.4 for both metals, respectively. The highest translocation factor for cadmium (0.67) and cobalt (4.23) was recorded under 0.6 mg L-1 cadmium and 0.2 mg L-1 cobalt. The results of the current study are encouraging to investigate in situ phytoremediation potentials of big-sage plant in heavy metal polluted soils.

Heavy elements are a unique class of toxins that cannot be broken down into non-toxic forms. The concentration of these toxic heavy metals has increased dramatically since the industrial revolution [1]. Heavy metals can reach the soil directly through the use of pesticides and fertilizers or indirectly due to factories emissions, fossil fuel burning, and wastewater residues, which might render soils unfit for cultivation if this problem exacerbates and increases exceeding certain limits [2]. In addition to opting out of the agricultural domain, soils contaminated with heavy elements such as lead, chromium, arsenic, zinc, cadmium, copper, mercury, and nickel impose great danger on groundwater water resources through heavy metals leaching. Contamination of crops grown in those soils negatively affects food and human health [3][4]. The main interest of environmental pollution studies is finding innovative ways to protect the environment from pollutants’ adverse effects [5].

Phytoremediation is a term usually given to the mechanisms by which living plants can positively attribute to the chemical properties of the soil they are grown in. In other words, it is an environmentally friendly technique to accumulate heavy metals in plant parts to reclaim polluted soils. The origin of the word phytoremediation came from the Greek word “Phyto” which means plant, and the Latin word “remedium” which means cleaning or restoration [6]. Phytoremediation is a practical and low-cost method for addressing soil developing countries [7]. The plant species used for this purpose are also found in several plant families, such as Asteraceae, Brassicaceae, Fabaceae, Euphorbiaceae, Poaceae, Violaceae, and Verbenaceae [8].

The big-sage (Lantana camara L.) plant is an evergreen ornamental shrub cultivated for the beauty of its flowers and as a hedge plant [9]. The native habitat of the big-sage plant is the tropical and subtropical regions of the American continent and in the tropics of Asia and Africa. This species spread widely around the world during the 18th, 19th, and early 20th centuries and became a preferred green plant [10]. Additionally, this plant previously showed promising results as a phytoremediator [11-14].

Plant tissue culture techniques have been widely used in phytoremediation research [15-20].  Considering the controlled environment and media structure in these studies, in vitro phytoremediation research might provide more accurate and reliable results. Therefore, this study aimed to evaluate the efficacy of the vegetative and root parts of big-sage plants in accumulating heavy metals (cadmium, cobalt, and lead) via in vitro culture technique.

This study was conducted in the Plant Tissue Culture Laboratory at the College of Agriculture, University of Basra, Iraq. The nutrient medium was prepared with Murashige and Skoog (MS) salts [21] (American Coisson Labs Company) at a concentration of 4.43 g L-1 + 30 g L-1 sucrose + 1.0 mg L-1 for each of glycine, thiamine-HCl, pyridoxin-HCl, and nicotinic + 40 mg L-1 adenine sulfate + 170 mg L-1 sodium hydrogen orthophosphate + 1.0 g L-1 polyvinylpyrrolidone (PVP). Additionally, 0.6 mg L-1 benzyl adenine (BA) and 0.1 mg L-1 naphthalene acetic acid (NAA) were added to MS medium. The medium’s pH was adjusted to 5.7-5.8 using HCl and NaOH solutions (1N). Then, agar was added at a concentration of 6.0 g L-1. After the preparation of the nutrient medium, 20 ml were poured into 2.5 cm x 18 cm glass tubes. Culture tubes were autoclaved at a temperature of 121 °C and a pressure of 1.05 kg cm-2 for 20 minutes.

The regeneration of plantlets

The shoots of the big-sage plant (Lantana camara L.) were obtained from shoot multiplication on MS medium supplied with 0.6 mg L-1 benzyl adenine and 0.1 mg L-1 naphthalene acetic acid after eight weeks of in vitro culturing (Fig. 1 A-D). These multiplicated shoots were then rooted by culturing them on MS medium supplied with 1.0 mg L-1 NAA and 0.1 mg L-1 BA (Fig. 1 E). The plantlets containing three pairs of leaves per plantlet were used in the heavy metals experiments.

1. Estimation of the shoot and root parts content of heavy metals, cadmium, cobalt, and lead, according to [22] using an atomic absorption spectrophotometer (Phoenix-986 model) at wavelengths of 228.8, 240.7, and 283.3 nanometers, for Cd, Co, and Pb, respectively.

2. The bioconcentration factor (BCF) was calculated by the following equation:

3. The translocation factor (TF) was calculated by the following equation:

The experiments were carried out within a complete randomized design. Each treatment contained ten replications (Ten plants). The data were analyzed statistically using ANOVA analysis of variance with SPSS Version 22. The means of the treatments were compared using the revised least significant difference test at a probability level of 0.05 [24]. 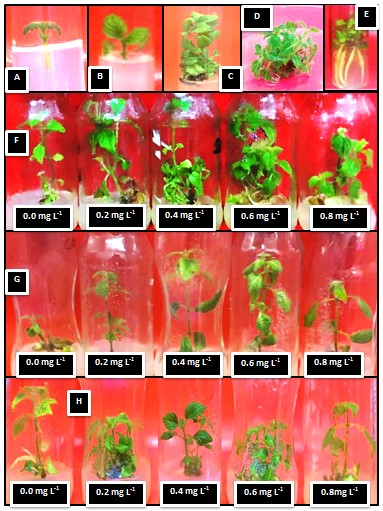 A significant increase in cadmium accumulation was noticed in the vegetative parts of the big-sage plant by increasing Cd concentration in the culture medium after four weeks of culturing (Table 1) (Fig. 1 F). The 0.8 mg L-1 Cd was significantly superior to other treatments (0.192 mg kg-1 Cd). This result is in agreement with the results obtained by [16], who studied cadmium accumulation in Populus tremula × tremuloides, Helianthus annuus, and Zea mays, and [19] study on Ageratum houstonianum and Petunia × hybrida via in vitro culture. The results also are consistent with the results obtained by [25] when studying the phytoremediation potentials of the Indian mustard plant, where an increase in cadmium content in the vegetative parts was observed when the added concentration increased. 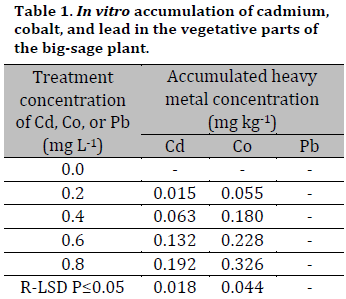 Table 1. In vitro accumulation of cadmium, cobalt, and lead in the vegetative parts of the big-sage plant.

Similar to cadmium, the accumulation of cobalt in the vegetative parts increased significantly with the increase of its concentration in the culture medium after four weeks of culturing (Table 1) (Fig. 1 G). 0.8 mg L-1 cobalt recorded the highest cobalt accumulation among the tested concentrations (0.326 mg kg-1). No signals of toxicity were noticed in the plants as seen in (Fig. 1 F-G) which indicates that the big-sage plant is an accumulating plant that tolerates heavy metals without affecting its growth. These results were similar to [26] results, which showed that accumulating heavy metals in such plants is a natural tendency for them.

Root cadmium and cobalt levels significantly increased with each increase in Cd and Co concentrations in the culture medium (Table 2). The treatment concentration of 0.8 mg L-1 Cd or Co resulted in the highest accumulation of the metal with 0.318 mg kg-1 Cd and 0.312 mg kg-1 Co. 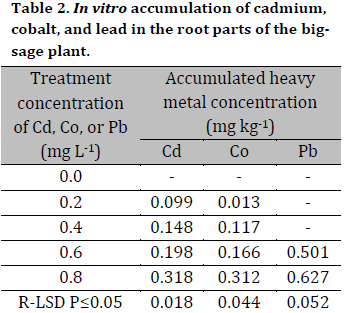 Table 2. In vitro accumulation of cadmium, cobalt, and lead in the root parts of the big-sage plant.

On the other hand, lead accumulated in root tissues was observed under 0.6 and 0.8 mg L-1 Pb only, with the latter recording the highest lead content (0.627 mg kg-1 Pb) (Table 2). The results of the current study contradict previous results on other plants, as they observed the accumulation of lead in both vegetative and root parts [15][16][18] [20]. 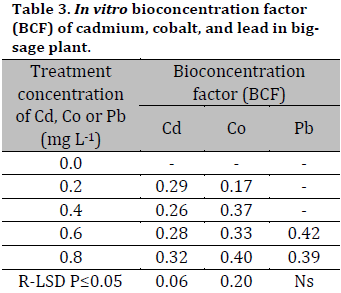 As for the lead experiment, 0.6 mg L-1 recorded the highest bioconcentration factor value; however, there was no significant difference between bioconcentration values under 0.6 and 0.8 mg L-1 (Table 3).

TF represents the concentration of pollutants accumulated in the vegetative parts of a plant to those in the root parts. The highest translocation value in cadmium experiment was observed under 0.6 mg L-1 Cd concentration (0.67), which was significantly higher than other concentrations (Table 4). This result refers to the efficiency of big-sage in transferring cadmium from the root to the vegetative parts. Similar results were obtained by [28] for the transfer of Cd in poplar and white mulberry trees. 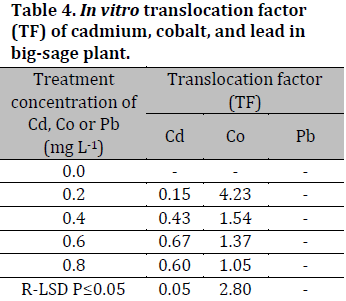 As for cobalt, the treatment with a concentration of 0.2 mg L-1 Co was significantly superior compared to the other treatments with a TF value of 4.23.

On the other hand, the translocation factor of lead for all concentrations was equal to zero since no lead accumulation was observed in the vegetative parts (Table 1).

It was reported that the optimum plant for phytoremediation should be able to absorb and accumulate heavy metals from polluted soils and have certain characteristics such as dense and deep roots, rapid growth, and large biomass [29]. The current study results showed that big-sage (Lantana camara L.) could be an efficient phytoremediator in soils polluted with cadmium and cobalt due to the convenient translocation factors of these elements.

This experiment showed that cadmium and cobalt accumulated in the vegetative and root parts of the big-sage plant. On the other hand, lead only accumulated in the root parts at higher concentrations. The treatment with a high concentration recorded the highest bioconcentration factor of cadmium and cobalt. The current in vitro results are promising, and further in situ investigations are needed to validate this plant’s potentials as an efficient phytoremediator for Cd, Co, and Pb in polluted soils.