Acute gastroenteritis is among the major causes of mortality among youngsters worldwide with 1.34 million deaths annually in children younger than five years. The cause of infections might be viral, bacterial, and/or parasitic microorganisms and the severity of the infection varies in different geographical regions depending on comorbidities and the immune status of the host [3].

Mycoplasma pneumoniae is a significant respiratory bacterial pathogen, particularly among youngsters as it is responsible for the acute upper and lower respiratory infections [4]. The most prevalent reported bacteria associated with diarrhea are Salmonella, E. coli, and Campylobacter [5].

The increased risk for serious infections among youngsters of less than 4 years of age is usually associated with the uncompleted schedules of vaccines resulting in a weakened immunity against microorganisms; and thus, a peak of infection cases among this group [6]. However, the rapid development in the health sector in some countries has resulted in approximately 2 million fewer deaths among children under 5 years between 2000 and 2010 [7].

If not diagnosed and treated properly, a bacterial infection can lead to severe complications according to the type and site of infection. The commonest serious infections usually involve bacteremia, meningitis diarrhea, pyelonephritis, and respiratory infections [8]. In Iraq, the mortality rate of children under 5 years was reduced from 38.6% in 2008 to 30.4 % in 2017 [7]; however, this rate is still relatively high. The true magnitude of the problem is not known as the health system has been badly damaged in Iraq after years of war and sanctions accompanied by a significant deterioration in water purification, sewage system, and electricity, which in turn have a strong impact on the prevalence of infectious diseases [9]. Therefore, this study aims to monitor the current severity and prevalence of some bacterial infections among children under 6 years old in Diyala governorate, Iraq.

A retrospective study was conducted in Al-Batool Teaching Hospital for Maternity and Children during the period from 1st of January 2019 till 31st of December 2019. The specific formula sheet was used to collect the information from 1000 children under 6 years of age with positive bacterial cultures isolated from different types of samples (i.e. blood, sputum, throat swab, stool, and urine samples) on proper media and identified using the general workflow at the hospital’s bacteriological and biochemical laboratory.

The statistical analysis was carried out using the statistical package of social sciences (SPSS) version 16. Chi-square test was used to assess the relationship between the studied variables (sex and age group) and type of infection. P-values < 0.05 were considered statistically significant.

Table 1. Distribution of bacterial infections in Al-Batool Teaching Hospital for Maternity and Children during 2019

Gender distribution results revealed that the type of infection was gender-linked as higher percentages of Bacteremia, GIT, and RTI infections were recorded among males with 55.02%, 55.98%, and 60.81% of the cases respectively; while in contrast, UTI cases were more prevalent among females with 59.60% of the total cases (Table 2).

Table 2. Distribution of bacterial infections according to gender in Al-Batool Teaching Hospital for Maternity and Children during 2019

Age disruption analysis results showed that there is a relationship between age and type of infection. The highest percentages of bacteremia, GIT, and UTI infections were recorded in the age group of (1-2 years) followed by (3-4 years); while RTI was more common (48.95%) in the age group of 5-6 years (Table 3).

Table 3. Distribution of bacterial infections according to the age of patients in Al-Batool Teaching Hospital for Maternity and Children during 2019 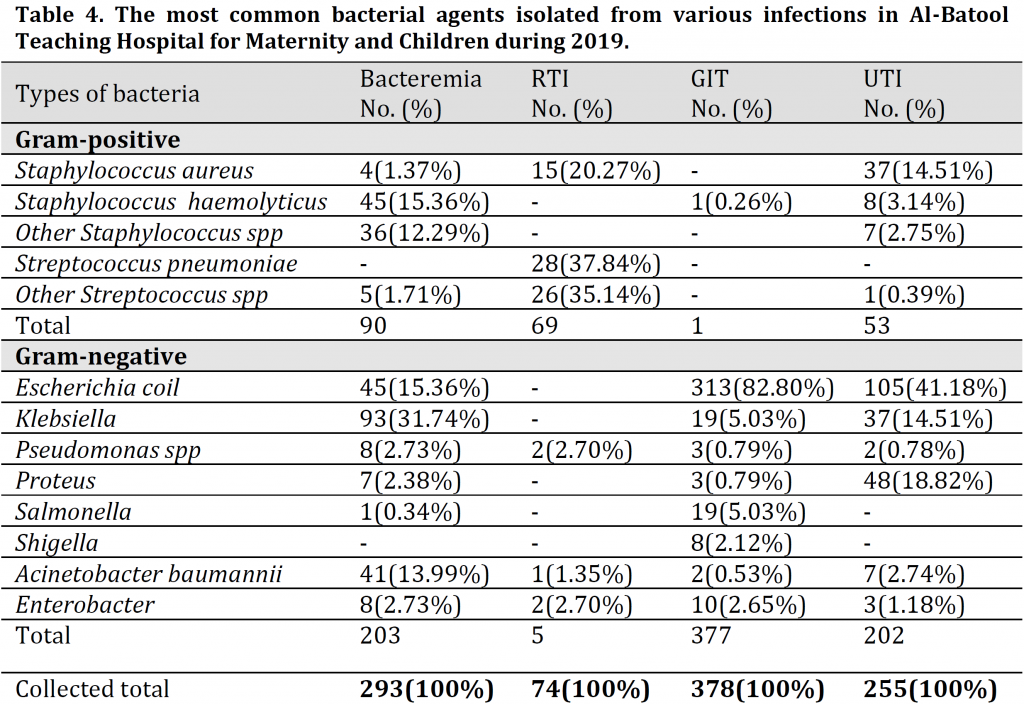 Table 4. The most common bacterial agents isolated from various infections in Al-Batool Teaching Hospital for Maternity and Children during 2019.

The major gram-negative bacteria isolated from pediatric bacteremia cases were represented by (31.74%) Klebsiella, (15.36%) Escherichia coli, and (13.99%) Acinetobacter baumannii isolates; while the most isolated gram-positive bacteria were (15.36%) Staphylococcus haemolyticus and (12.29%) other Staphylococcus spp.

As for RTI, the most common isolated pathogens were Streptococcus pneumonia, Staphylococcus aureus and other Staphylococcus spp (gram-positive) with other gram-negative isolates of Pseudomonas spp and Enterobacter. The most common pathogens in gastrointestinal tract infection were Escherichia coli (82.80%), Salmonella (5.03%), and Klebsiella (5.03%) while only one case was attributed to Staphylococcus haemolyticus; whereas in UTI, The most common isolated bacteria were Escherichia coli 41.51%, Proteus 18.82%, and Klebsiella 14.51% while Streptococcus spp was the cause of only one of the cases.

According to the results of gender distribution analysis, significantly higher percentages of infection were recorded among males for GIT, bacteremia, and RTI. Similar findings were reported in other studies in Iraq such as [11] in Baghdad and [12] in Erbil, as it was found that infection incidence in males was higher than females for all pathogens which were attributed to the physiological differences between genders. Additionally, [13] reported a higher number of isolates among male patients (58.3%) when compared to those in females (41.7%).  Furthermore, [14][15] showed higher ARI infection cases among males than females. Previously, [14] reported that although 50% more ARI cases were found in males, no significant correlation between gender and the ARI infection severity was noticed [14]. In general, male patients were more than female due to the social condition where males are more exposed to the surrounding environment than females from a young age. The contrary UTI results with more isolates in females than males are in agreement with other reports [16]. This is related to anatomical differences between the sexes and the short length of the urethra in females which makes the bladder more prone to urinary tract infections [17].

The current study showed that GIT is more prevalent in 1-2 years of age group and decreases in older ages which is in correspondence with [18] who reported the highest rates of diarrhea among the ages from a few months to less than 2 years. The greater risk of diarrhea in the first  2  years of life was previously attributed to various factors such as the low levels of maternally acquired antibodies, the low active immunity in the infants, in addition to the non-hygienic contaminated food [19] and the decreased passive immunity after 6 months of age [20]; however, the responsible pathogens stimulate a partial immunity against similar later infection or illness, which explains the low occurrences in older children [19].

As for urinary tract infection, most cases were noticed in the age group of 1-2 years. This result agrees with that obtained from [16] who reported the highest rate of bacterial growth among children with UTI to be found at the age group of 4 days to 2 years; while the lowest rate was within the age group of 6-8 years old. Additionally, [25] found that 48% of children who had UTI were under 1 year and noticed a decrease in infection occurrence above one year until the fourth year. Another study found that the highest percentage of UTI in children was in infants at the age of 2 months to 2 years [26]. The main reason behind these results and reports are the infants’ immature immune system that develops later on [27].

High frequency of respiratory tract infections was recorded in the age group of 5-6 years which disagrees with the study of [14] who found the majority of RTI cases in the 3-13 months age group [28] as a result to the weak immunity, narrow airways, the under-developed lungs and the relatively short bronchial tree in this age group [29]. However, the differences between the current study and [14] reports might be due to the limited number of cases from the age group of under 1 year old.

The distribution of bacterial species, according to the type of infection (Table 4) suggested that the highest rate of enteric bacteria among examined diarrheal samples was E. coli with 82.80% of the cases. This finding was in tune with [18] in Duhok and [11] in Kerbala. Unsurprisingly, the reasons behind this result are poor sewer systems and the contamination of drinking water with wastewater. On the other hand, bacteremia was mainly caused by Klebsiella with 31.74% of the cases followed by Escherichia coli and Staphylococcus haemolyticus which showed the same percentages 15.36%. A comparative study conducted in India showed that Klebsiella species was the predominant organism isolated in bacteremia [30] which is similar to the current study. In contrast, [21] showed that the highest infectious causative agent isolated from samples of bacteremia patients was Staphylococcus aureus with 19.4%. Interestingly, there were no bacteremia cases associated with Streptococcus pneumoniae. In UTI, the pattern of the bacterial isolates found in this study was similar to those reported in [16][31][32]. These studies have pointed to the sovereignty of E. coli as a cause of UTI, followed by Proteus, and Klebsiella spp., and attributed the cause of the high prevalence of these bacteria to their natural presence in the human gut causing endogenous infections. Streptococcus pneumoniae represented the highest infection rate among RTI with 37.84% of the cases followed mainly by Pseudomonas spp and Staphylococcus aureus. This result is consistent with [33] in Baghdad as they found that Streptococcus pneumoniae was the main pathogen responsible for RTI cases followed by Staphylococcus aureus. Additionally, they reported that Klebsiella species and Pseudomonas aeruginosa were the commonest isolates among Gram-negative pathogens [33]. The current results are approximately in agreement with [34][35] and contradiction with [36][37].

In conclusion, bacterial infections are still common in our community, the mode of bacterial infection transmission is usually through direct contact (person to person); ingestion of contaminated and non-hygienic food and water, or poorly cooked food. Therefore, this situation requires a great social effort and for the health sector to perform better in terms of prevention and control. Additionally, it is epidemiologically important to pinpoint how often a bacterium generates a health problem in each population individually, which requires further and elongated studies.