Onchocerciasis, also called River blindness, is a parasitic disease that affects humans, caused by a nematode parasite, Onchocerca volvulus. A preliminary study was carried out to evaluate the microfilariae load in the head, abdomen, and thorax of blackflies and determine the infection prevalence of Onchocerca volvulus at the banks of Kaduna river. During the fly-catching period, a total of 288 flies were caught at the banks of Kaduna river along Yakowa Express Road and dissected under a dissecting microscope. Out of the dissected flies, 66 were found infected with L3 infective larvae. The highest infection rate was seen in November (23) with 38.85% relative infection, while the lowest infection was in December (9) with 13.36% relative infection. Furthermore, A significant positive association (p <0.05) was observed between transmission potential and number of infections. It is clear that blackflies still take blood meals and harbor these microfilariae. Thus, the ongoing transmission of these microfilariae larvae could likely lead to the re-emergence of the disease in Kaduna State, Nigeria.

River blindness is one of many neglected tropical diseases caused by the nematode parasite Onchocerca volvulus [1][2]. River blindness is a debilitating disease that affects people in rural areas with severe conditions that lead to irreversible visual impairment [3][4].

The parasitic helminths are transmitted through the bites of infected female blackflies of the species Simulium damnosum [5]. During a blood meal, microfilariae enter the host and migrate through the skin, thus causing severe itching, dermal pathology, producing visual loss and blindness in patients with heavy parasite loads [6]. The infective larvae (L3) present in the proboscis of the vector Simulium damnosum can be easily transmitted to another person when bitten by the infected female blackfly. Thus, entomological surveillance is indicative of the control of onchocerciasis [7]. Therefore, eliminating the vector Simulium damnosum is of paramount importance to controlling and eradicating river blindness globally [8].

Sub–Saharan Africa is the most afflicted region, with about 99% of active cases reported worldwide [9][10]. A vector control strategy has been introduced to curb the breeding of blackflies alongside chemotherapeutic interventions using Ivermectin (mectizan, Merck & Co) ‘the wonder drug’ [11][12]. Mectizan is known to be very effective as a microfilaricidal drug against O. volvulus. However, there is evidence of inadequate response of microfilariae to mectizan, causing drug resistance [13][14]. Although ivermectin has proved very promising and successful in reducing morbidity in hyperendemic communities, this was achieved with consistent and repeated mass drug administration [15][16].

Alternative chemotherapeutics and complementary measures are needed to sustain the current interventions, and breaking the transmission cycle is considered a promising strategy. Therefore, this study aimed to evaluate the microfilariae load in blackflies to determine infection prevalence, which would help to assess active transmission status and onchocerciasis risk to settlements close to the biting sites.

The Health Research Ethical Committee of Kaduna State Ministry of Health, Kaduna (MOH/ADM/744/VOL.1/268) issued the approval for this study. The fly collection was conducted at alternating locations of Kaduna river banks, under the bridge of Yakowa Express Road, Kaduna State, Nigeria, between 4.00pm and 6.30pm daily for the period of study (September – December) as described by [18]. Fly collectors were treated with ivermectin, a prophylactic treatment against filariasis before the entomological survey. The baits expose their lower limbs for female blackflies to patch on for a blood meal whereby plane EDTA-free tubes were used to trap the flies before taking a blood meal, and 288 female blackflies were captured.

The captured flies were dissected on a daily basis (Fig. 1 A) using a dissecting microscope to ascertain parity and microfilariae load. Dissection pins were deployed to hold the blackfly around the thorax, piercing the abdomen at the posterior end and then pulling out the different internal organs to examine the number of fat bodies, the state of the malpighian tubules, and the ovaries in order to identify parous and nulliparous flies respectively (Fig. 1 B). The proboscis, head, thorax, and abdomen of 97 parous flies were further examined separately for Onchocerca volvulus developing larvae at each stage (L1, L2, and L3) as described previously by [18]. The infective stage L3 was located in head segment of Simulium damnosum, L2 in the thorax around the flight muscle whereas the L1 was located in the abdomen. The microfilariae examined were documented on a dissection record sheet.

Figure 1. Anesthetized blackflies in normal saline(A), the dissection (B), and the study of dissected blackflies (C).

The transmission index was calculated from the dissected 288 blackflies (total number of dissected flies) caught on human baits during blood meal between September and December. The monthly biting rate, monthly transmission potential and percentage of infection as depicted in equation (1), (2) and (3) were calculated following the procedure described by [17][18].

Chi-square analysis was used to determine the association between the number of blackflies dissected and the number of infections using IBM SPSS windows version 20. The descriptive statistics data were presented as percentages and frequencies. The statistical significance was considered at P<0.05. 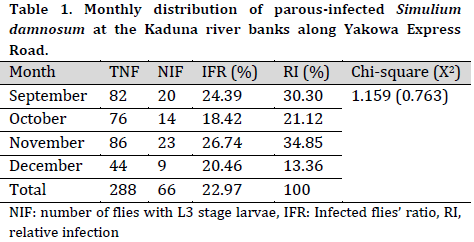 The studies of microfilariae larvae load in Simulium damnosum indicate the possible transmission of infective larvae among local farmers, especially during irrigation along Kaduna river banks. The monthly infection load was high in November and September, whereas December had the lowest infection load. The observed high and moderate infection load recorded in November, September, and October may suggest high transmission potential from the vector to the human host as previously described by [18].

Number of infection and transmission potential of microfilariae larvae 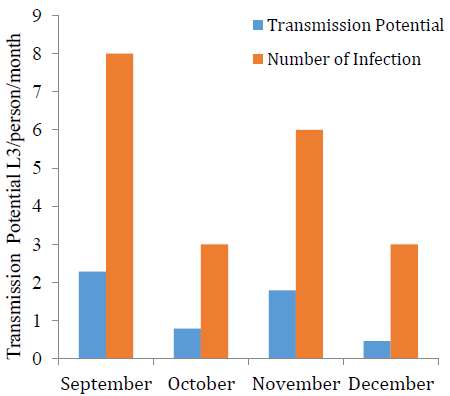 Seasonal fluctuations are influential factors that determine the vector population and infection load, which in turn affects the rate of infective larvae transmission in the locality. The peak of transmission usually happens during the second half of the year, which corresponds with the reports of [19].  Humans are a suitable reservoir for Onchocerca volvulus. Due to the emergent resistance by the parasite toward mass drug administration, the need for rapid interventions to control blackflies in the area has risen [20]. Moreover, it was proven that vector control has immensely reduced the prevalence of Onchocerciasis over the years [21], which indicated the importance of understanding black fly population infection status during infection season. Overall, the total infectivity rate was the highest in November and September, which raises the transmission potential of microfilariae during these months.

Distribution of microfilariae larvae in different body segments of blackflies

The proportion of infection in the thorax was relatively higher than those of the head and abdomen of the infected flies. There was a significant (P<0.05) relationship between the monthly distributions of microfilariae larvae in Simulium damnosum with their body part (Table 2).

The infective larvae L3 are mainly detected both in the thorax and head during molting from L2 stage to L3 infective stage [6] since sometimes the L3 stage molting starts in the thorax and completes in the head. The observed low infectivity rate in December could be attributed to specific ecological conditions. However, the infection rate tends to be much higher during the dry season than in the rainy season (June – September) [22][6].  The current finding correlates with a similar study reported by [17], which raises awareness for the impending danger of re-emergence and possible ongoing transmission of Onchocerciasis in Kaduna metropolis because of the fast-running waters of Kaduna river that provides conducive breeding habitat for Simulium damnosum. Flies collection period and time may also influence the microfilariae load and transmission potential, considering that most blackflies were caught in the evening [12].

The high percentage of microfilariae larvae stages found in different parts of Simulium damnosum is evidence of active transmission around Kaduna river and possibly within the surrounding settlements, with fishers and farmers been among the most vulnerable victims. It is clear that blackflies still take blood meals and harbor these microfilariae, and ongoing transmission may likely lead to the re-emergence of the disease. Therefore, intensive monitoring and systematic surveillance approach for epidemiological examination are recommended to understand the current transmission state within the surrounding settlements. However, a continued mectizan mass drug distribution and addressing the drug-resistant issue are highly expedient to break the transmission cycle.