Heavy metals are elements with atomic weights ranging between 63.546 and 200.590 and a specific gravity greater than 4.0 [1]. They are classified as essential and non-essential elements [2]. Essential heavy metals are those required in minute quantities by living organisms, e.g. cobalt (Co), copper (Cu), iron (Fe), manganese (Mn), molybdenum (Mo), vanadium (V), strontium (Sr), and zinc (Zn); however, excessive levels of these elements are poisonous. Non-essential heavy metals, on the other hand, are toxic even in ultra-trace concentrations, e.g. mercury (Hg), lead (Pb), cadmium (Cd), and arsenic (As). Heavy metals and xenobiotics are regarded as the serious pollutants of the aquatic environment because of their persistence and tendency to bioaccumulation in the environment aquatic organisms, particularly fishes, due to the advanced level they occupy in the aquatic food chain [3].

Heavy metals enter the aquatic ecosystem through atmospheric deposition, geological erosion [4], and human activities such as industrial effluxes, sewage, marine transportation, agriculture, and mining wastes [5][6][7]. The contamination chain in the aquatic environment always starts with industry and other anthropological activities then transferred into the aquatic ecosystem through the atmosphere or soil interactions with water surfaces, these contaminants enter the biomass of small water organisms (phytoplankton, zooplankton) and end in fish which is consumed by animals and humans [8].  Additionally, heavy metals enter the fish body through gills and skin. Furthermore, Heavy metals cannot be detoxicated by metabolic processes and therefore, marine organisms bio-accumulate these elements in their bodies to reach concentrations of 100.000 times the surrounding water such as Hg and Cd levels in oysters and mussels [9]. Heavy metals toxicity can be categorized in three levels as they block the essential functional groups of proteins and enzymes; displace metal ions from biomolecules, or modify the space structure of biomolecules [10] which illustrates the threat of high heavy metals concentration in the marine environment [11][12][13].

Fish are undoubtedly key members of many natural food webs and considered important sources of animal proteins in the human diet (16-23%) [18]. Studies on fishes have assumed greater significance due to the increasing emphasis on pisciculture and the growing community awareness of the ecological impact of natural fresh and marine water resources [19]. Additionally, monitoring environmental, physiological, and pathological changes can provide basic information regarding the status of open-water fish communities within their environment [20]. Therefore, this research aimed to:

Investigate the effects of these pollutants on liver and kidney functions of mullet fish (Mugil Cephalus) present in both sites.

Tubruk harbor (TH) (Fig. 1 A) is an important natural commercial and fishing harbor with a terminal for oil shipping. Additionally, Tubruk is a populous industrial city and the municipal untreated sewage water of the city is discharged directly into the sea. Furthermore, precipitation on the many garbage dumping cites within the city eventually infiltrates into the sea, leading to aquatic pollution on the coast of this harbor.

Umm Hufayan lagoon (UHL) (Fig. 1 B) is a brackish lagoon that covers a surface area of about 2 Km2 with depth ranges between 0.5 and 3m. Underground springs at the southern side of the Lagoon discharge fresh water into it. Therefore, the aquatic environment of the lagoon is healthy and the anthropogenic use is limited to a small artisanal fishery [21].

Sixteen water samples (2-3 liters each) were collected from each of TH and UHL at about 20 cm below the sea surface between September 2017 and April 2018 at a rate of two samples per month. The samples were first filtered in the field to remove particulates, stored in clean polyethylene bottles, and kept in a refrigerator until analysis.

A hundred fresh M. cephalus were collected concomitantly with water sampling from fishers of TH and UHL (50 fish per site). Blood samples were rapidly drawn from the fish caudal vessel or hearts using sterile syringes fitted with 21-gauge needles [22] and were then transferred into conventional blood venojects.

Determination of heavy metals in the water samples

The digestion of the water samples was carried out according to [23]. 1000 ml of water sample of each location was evaporated until the volume became 100 ml. 15ml HCL (37%) was added and heated on hot plate for 10 min. After cooling, 15ml of HNO3 was added and the digest was again heated until the volume became 50ml. Then, the digested solution was transferred to a 100 ml volumetric flask and brought to a volume of 100 ml with deionized water. Heavy metals in the digested samples were then measured using inductively coupled plasma atomic emission spectroscopy (ICP-OES).

To obtain serum, blood samples were allowed to clot on ice for 1 h. Serum was then separated from by centrifugation at 14000 g for 5 min [22]. The venojects were then taken to the medical laboratory in the city of Al-Baydafor the determination of the aforementioned indices.

The statistical analysis was performed using SPSS. The two fish groups were compared using Student’s t-test. A difference was considered significant at p

The pH differences between the two sites were minimal; however, dissolved oxygen levels were lower in TH than in UHL in the study duration (Table 1). 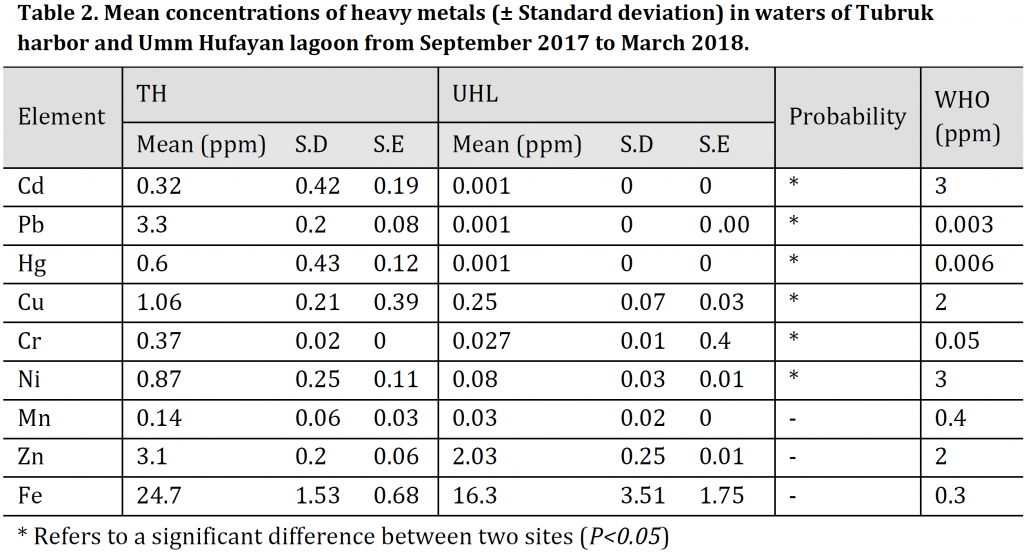 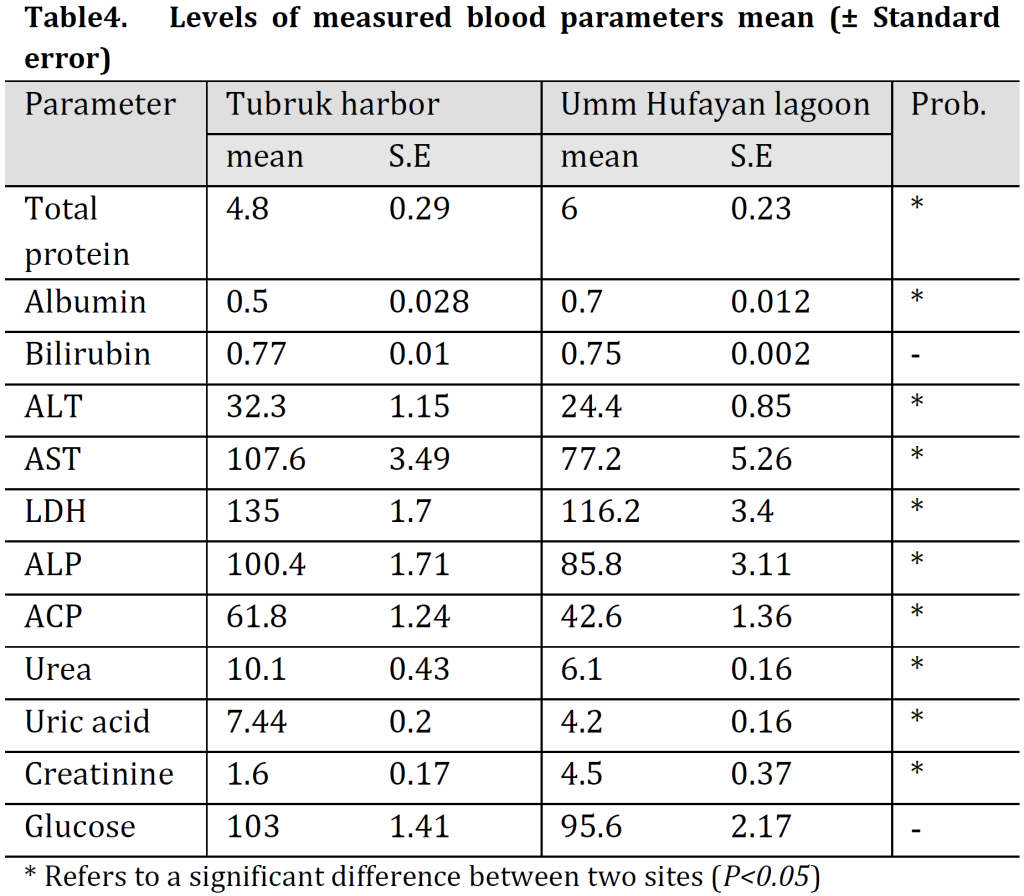 Correlations between heavy metals concentrations and levels of the liver enzymes

The results of total protein and albumin in serum showed a significant drop in fish of TH (polluted site) comparing to UHL (control). This drop was accompanied by a significant increase in water’s Pb, Zn, Cu, Ni, Hg, and Cd in TH suggesting that the elevated levels of these heavy metals might have had an inhibition effect on the protein production process [24]. Hypoproteinemia was previously observed by [25] in hybrid striped bass after chronic exposure to stress. Additionally, [26] reported that hypoproteinemia and hyperproteinemia may be observed in fish as a stress response. [27] observed a decrease in total protein content in blood serum in addition to a decrease in body weight of Clarias gariepinus fish supplemented with a diet containing 15 ppm mercuric oxide for 4 weeks.

The present study showed a slight but non-significant increase in bilirubin levels in fish of TH compared to UHL fish. This increase may be due to liver malfunction, as [28] previously reported a marked increase in bilirubin in the wild Don salmon exposed to paper mill and field drain discharges. Additionally, hyperbilirubinemia jaundiced condition was reported to be the final stage of pollutant intoxication [29]. Furthermore, hepatotoxic agents were reported to induce bilirubinaemia in wild Don salmon and captive North Esk salmon [28].

In the present study, a significant increase in ALT, AST, ALP, and LDH was documented in TH fish samples compared to those of UHL. This is in agreement with [30] who observed a significant increase in ALT and AST in Clarias gariepinus fish serum when mercuric oxide was included in the dietary program. The elevated levels of urea and liver enzymes in attribution to the high levels of heavy metals were consistent with the results of [31] who reported liver and kidney injury of Tilapia zilli after exposure to cadmium chloride at 0.25 ppm for 21 days. Furthermore, [27] found an increase in urea levels in Clarias lazera fish after as a result of vanadium toxicity. Urea was also significantly increased in Channa punctatus fish exposed to nonlethal concentrations of As2O3 for 14 days [32]. However, the current study contradicts [27][31][32] reports of creatinine increase with heavy metals exposure as the serum of UHL fish contained significantly higher levels of creatinine when compared to TH (polluted site).

An increase in glucose level was observed in the serum of TH fish compared to UHL; however, this increase was not significant. In general, blood glucose level is highly influenced by carbohydrate metabolism rate under stress and hypoxia conditions as [33] previously reported that hyperglycemia occurs when a stress stimuli is followed by a rapid glucocorticoids secretion from the adrenal tissue. The effects of sub-lethal concentration of nickel on the freshwater fish Oreochromis niloticus were studied by [34] and it was reported that serum ALT and AST levels in addition to serum glucose were significantly increased under this treatment, while the total protein and albumin levels were decreased.

In the present study, cases of no correlation, negative correlation, and positive correlation were observed between heavy metal levels in water and liver enzyme efficiency in Mugil cephalus. Such varied responses may be due to the properties of the metal, concentration, toxicity, absorption, metabolism, and detoxification methods in addition to fish species, age, size, and food habits [35][36]. The observed lack of correlation between some liver enzymes and some heavy metals may be due to a low concentration of these metals below the level at which the enzymes respond [37].

The statistically significant correlation observed between Cd concentration and LDH activity was in correspondence with [38] results who reported that Cd increased concentration was the cause of elevated LDH in Cyprinus carpio.