A new record for the invasive aquatic fern Azolla filiculoides Lam. in the White Nile, Sudan

This paper documents the presence of the invasive aquatic fern Azolla filiculoides (Salvinaceae) in the White Nile near Al Hideib village in Sudan. Morphological characters of vegetative and male reproductive parts were investigated. Primary and secondary rhizomes arrangements, roots positions and numbers, color and surface hairs of the submerged and floating leaves, leaf arrangements and margin, in addition to shape and size of male sporocarps and sporangia were reported as key characters. Habitat description and complementary notes were also provided.

The genus Azolla Lam. (Salvinaceae) consists of six recognized species. These species are A. filiculoides Lam., A. caroliniana Willd., A. mexicana C. Presl and A. microphylla Kaulf. distributed in temperate, sub-tropical and tropical regions of North and South America; A. nilotica Mett., native to East (Sudan to Mozambique) and A. pinnata var. imbricata (Roxb. ex Griff.) Bonap from subtropical and tropical Asia; A. rubra R. Br. native to Australia and New Zealand and A. pinnata var. pinnata R. Brownoccurring in Africa [1-3]. A. filiculoides has spread widely throughout the world. It has been introduced into Europe, North and sub-Saharan Africa, China, Japan, Australia, New Zealand , the Caribbean, and Hawaii [4]. In Sudan, Salvinaceae is represented by two species to date [5-15], Azolla nilotica Mett., which has been reported as  native to the White Nile [5-10] and Salvinia molesta D.S. Mitch. which was documented for the first time in Sudan in the White Nile at Kosti town [15]. This paper aims to document the presence of Azolla filiculoides, an invasive species in the White Nile, including a supplemental description and comments.

Three botanical surveys were conducted in the White Nile river during March, July, and October 2019. The sampling site was located near the Al Hideib village (12.967317°N, 32.829367°E) in the White Nile state (Fig. 1). Samplesof Azolla filiculoides were collected, placed in plastic buckets containing river water, and transported to the laboratory. Specimens were examined and photographed under the light microscope (Delta Optical Smart PRO Microscope with a 5MP sensor and ImageJ processing program) Semi-permanent slides were mounted to analyze features with taxonomic relevance. Avoucher specimen (SNHM-00001108) was housed in the Herbarium of Sudan Natural History Museum of the University of Khartoum. Identification and information on commonly associated macrophytes followed relevant floras and publications [16-18]. Commonly associated macrophytes were also reported in the different collection surveys.

Figure 1. Maps of the locations of the collection sites of Azolla filiculoides in the White Nile, Sudan. Satellite map is adapted from Google Maps 2020.

Vegetative and reproductive parts of Azolla filiculoides were observed in the study area during different seasons of the same year, which indicated that this species has the ability to thrive in the climate of the White Nile state in Sudan. Azolla filiculoides was commonly recorded in sunny environment as well as shady areas in the backwater of the White Nile river, where water is still or sluggish (Fig. 2 A). Azolla nilotica Mett. and Salvinia molesta D.S. Mitch (Salvinaceae) Pontederia crassipes Mart. (Pontederiaceae), Ludwigia adscendens subsp. diffusa (Forssk.) P.H.Raven (Onagraceae), and Echinochloa pyramidalis (Lam.) Hitchc. & Chase (Poaceae)were all recordedas macrophytes commonly associated with Azolla filiculoides being spotted during the three collections surveys. A list including these species and other associated macrophytes reported during the fieldwork is provided in (Table 1). 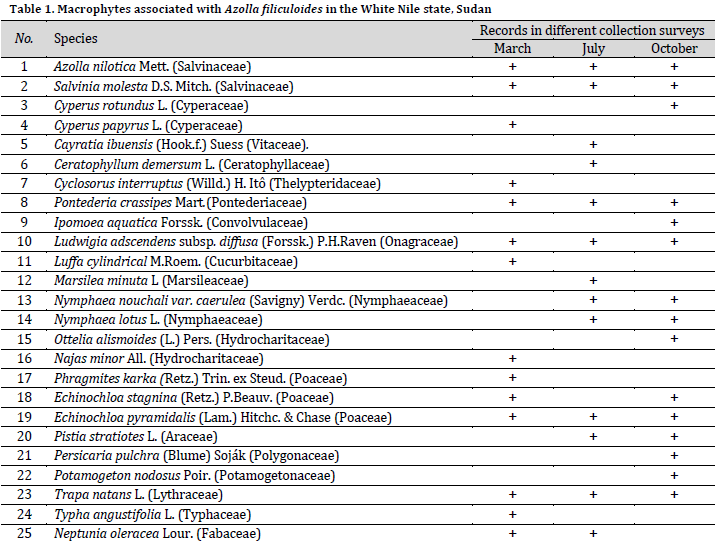 Plants are small, aquatic, dark green to reddish, floating as individuals up to 1.5 cm long (Fig. 2 B and C) or in collections (mats) reach 15-25 cm thick. The glabrous stem consists of the main rhizome and secondary rhizome. The roots are adventitious from stem nodes, solitary, glabrous, hairy along the root length (Fig. 2 D and E). The leaves are sessile, alternate, deeply 2-lobed. The submerged lobes (Fig. 3 A) are thin, translucent, and larger than the floating lobe. The floating leaves (Fig. 3 B) are green, with one-celled papilla and chambers containing symbiotic filamentous of Anabaena azollae Strasb(blue-green algae). Microsporocarps are globose, with a diameter of 1.5 mm (Fig. 3 C). Microporangia is thin-walled, without annulus, irregularly breaking, and 20-27 µm in size (Fig. 3 D). Megasporocarps not found. 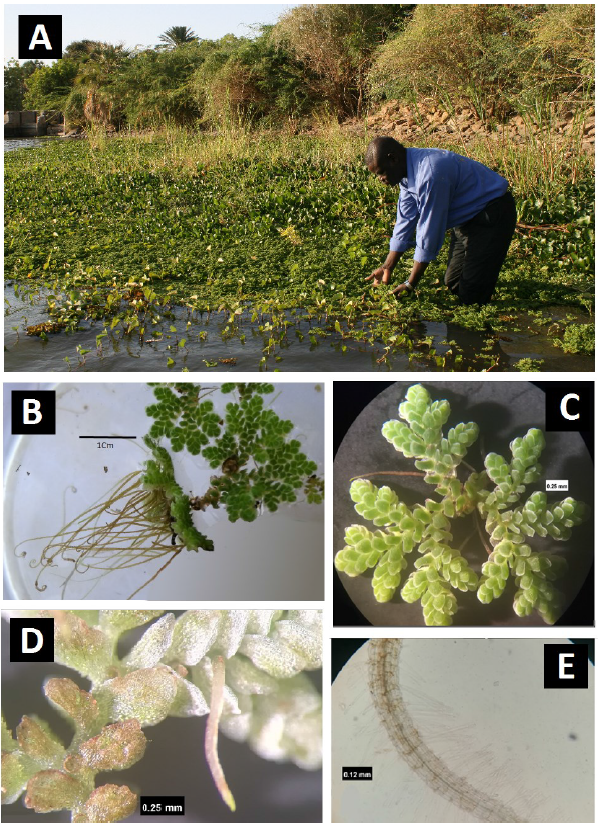 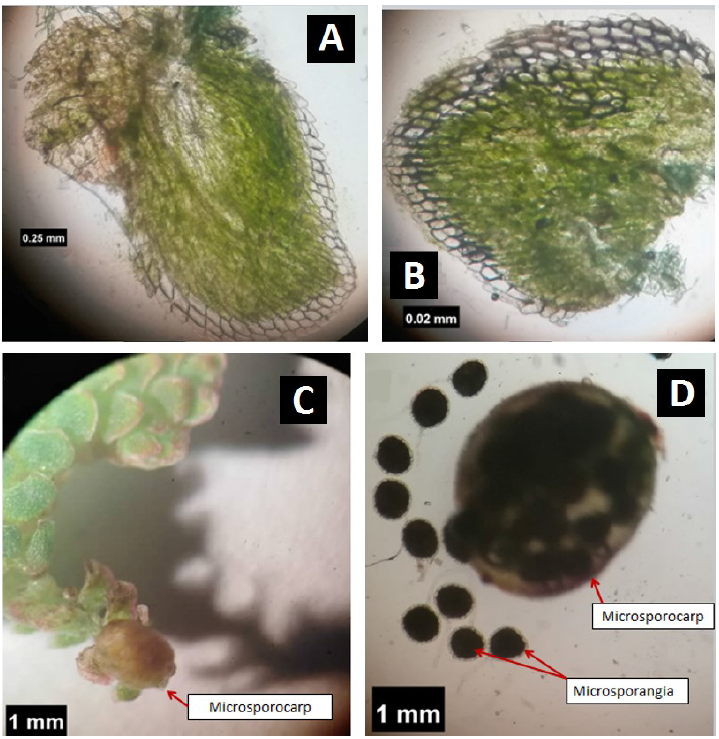 The invasive status of A. filiculoides in the White Nile, Sudan

A. filiculoides is economically important and has been used in South-east Asia as green manure for rice cultivation [6]. It is also reported as valuable nutrient for livestock, poultry, and fish [19]. However, it has been reported as an invasive introduced species in countries sharing the White Nile basin with Sudan, such as Kenya, Rwanda, Tanzania, and Uganda [20]. It is probably drifted through South Sudan by water flow and fishing activities. Dense mats of this fern deteriorate the environment of submerged plants and algae by reducing the photosynthesis and oxygen diffusion rates. Simultaneously, the decayed parts of A. filiculoides create an anaerobic environment that, accompanied by the lack of light penetration, results in the degradation of drinking water quality [21]. Additionally, the introduction of A. filiculoides in the White Nile river will increase the water loss through evapotranspiration[22]. Therefore, further assessment of A. filiculoides impact on the environment and human health in the White Nile basen is highly recommended.

This paper documents the presence of the invasive aquatic fern Azolla filiculoides (Salviniaceae) in the White Nile near Al Hideib village, Sudan. Further assessment of the spreading impact of this fern in the White Nile is needed.